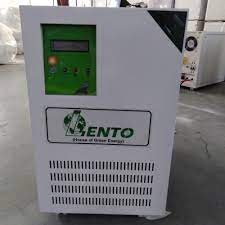 Sine wave inverters are a type of power inverter that generates an output voltage waveform comparable to that of grid-connected AC power sources. This type of inverter is commonly employed in power systems where sensitive equipment or loads demand a high-quality, sinusoidal waveform.

Before we choose an inverter for your specific needs, let us first understand the fundamentals. You purchase an inverter to supplement grid power; when the power goes out, you want the same type of electricity to power your appliances. A pure sine-wave inverter generates power identical to that supplied by the grid. So, your reasons for selecting the best inverter are as follows:

Before we get into the benefits of using pure sine wave inverters in your home, it's important to understand what they are and how they work.Pure sine wave inverters produce AC power that closely resembles the real thing - a steady, continuous sine wave with smooth, periodic oscillations. As a result, the price of this solar inverter for home is quite high.Furthermore, certain devices are only compatible with these inverters. If you use another type of inverter, your devices may malfunction or be damaged.

How does a pure sine inverter work?

Q. Do you really need a pure sine wave inverter?

Q. Are pure sine waves worth it?

With a pure sine system, you won't have to worry about your picture getting fuzzy. Not only that, but a pure sine current is essential for sensitive medical devices like CPAP machines and heart monitors. In general, pure sine power is required for anything Energy Star 80 or better with an Active PFC power supply.

For example, laptop computers, cellphone chargers, and all other equipment that uses a rectifier or AC/DC adapter to take an AC input and output DC to the device will typically work fine without a pure sine wave inverter.

Q. Which wave inverter is best?

Sine wave inverters are more efficient than square wave inverters, when it comes to the conversion of DC to AC. This ensures that the power loss is minimised, due to greater efficiency. As a consequence, your electricity bill does not shoot up. This is an immediate benefit of using a sine wave inverter.

Q. What is the best inverter brand?

Some devices and appliances that require a pure sine inverter are:

Q. What inverters are made in the USA?

Solectria is one of only three major solar power electronic companies that solely manufactures in the United States. The others include microinverter manufacturer Chilicon Power, power optimizer maker Alencon Systems and hybrid inverter vendor Pika Energy (which was recently acquired by another U.S. company, Generac).

Q. What is the cost of a pure sine wave inverter?

The price of a pure sine inverter ranges from 3.5K to more than 85K.