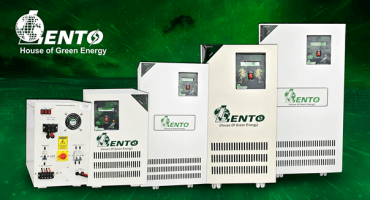 Pure Sine Wave Inverter Price in Nigeria Many appliances only work with alternating current voltage, which shouldn't be a problem if you have a wall socket nearby, right? However, in the event of a power outage or other emergency, you're pretty much stuck with batteries. And you don't want to be left with only 12V if the power goes out. Pure sine wave inverters fall into this category. These devices convert low voltage DC to 110V or 120V AC electricity, which is used by household appliances.
Size:

Many appliances only work with alternating current voltage, which shouldn't be a problem if you have a wall socket nearby, right?

However, in the event of a power outage or other emergency, you're pretty much stuck with batteries. And you don't want to be left with only 12V if the power goes out.

Pure sine wave inverters fall into this category. These devices convert low voltage DC to 110V or 120V AC electricity, which is used by household appliances.

Looking for the best pure sine wave inverter in Nigeria? Then this article is for you. Read on!

Product Name - HKVA Static and UPS inverter- Most appliances like CFL, fans, motor-based equipment like air conditioners and pump sets are designed to work on 50 Hz sine waves. Running such types of equipment on unregulated quasi sine wave-square wave-based inverters poses a risk as regards performance and durability. Lento DSP sine wave Static UPS and inverters are designed to provide stable 50 Hz sine wave irrespective of load and battery voltage, making them the most suitable for inductive, capacitive and non-resistive loads. Importantly, our inverters and UPS are designed to deliver instantaneous high current during start-up, especially in the case of air conditioners and refrigerators, with safety cut out when battery voltage goes lower than a specified point to avoid brownouts and burning of motors.

How does a pure sine inverter work?

Q. Which is the best pure sine wave inverter?

Q. How do you choose a pure sine wave inverter?

When choosing your sine waveform inverters, you need to make sure you are selecting an inverter that covers your total watt draw. Also be sure to account for a possible surge draw. Most devices such as laser printers, pumps and compressors take a lot more energy to get started, and it isn't always listed on the device.

Q. How many batteries are needed for a 2000 watt inverter?

Q. What does a pure sine wave inverter do?

A pure sine wave inverter is a device that converts direct current (DC) such as what's produced by a solar system or RV batteries, to usable alternating current (AC) that most appliances use. What is this? These “pure sine waves” ensure smooth and steady voltage, just like in the power grid.

Modified sine wave inverters are still a viable option if you have limited, simple appliances to power and aren't as concerned with efficiency. However, if you want the peace of mind of knowing your appliances and devices will run safely and at the highest efficiency, we recommend purchasing a pure sine wave inverter.

Pure sine wave output is always needed for a grid-tie solar system. It is generally needed for newer LED TVs, CFL light bulbs, and inductive loads like brushless motors. Clocks and audio equipment will behave much better on a pure sine wave.

Q. Can you run a fridge on a pure sine wave inverter?

Inverters will draw power from your batteries when not in use, and the unit is turned on. This can vary from around . 02 amps right up to 2amps depending on the unit and design of their standby systems.