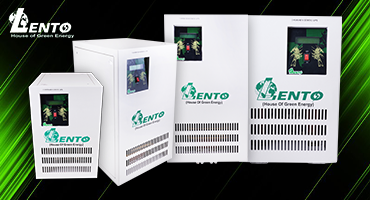 Hybrid Solar Inverter850 VA Price in Nigeria Solar inverters are rapidly replacing generator sets (petrol, diesel, kerosene, and all other types of gen sets) as the preferred backup power supply option. Solar inverters are being used as (alternative) power sources by households, industrial factories and facilities, commercial companies, educational institutions, restaurants, and all other businesses. Solar inverters convert direct electric current from solar panels to alternating current, which is then used by electronic and electrical appliances. This is understandable given the numerous advantages solar inverters have over other available power alternatives (such as generators) — simple maintenance, no exhaust fumes, silent operation, portability, pollution-free operation, cost-effectiveness, and so on.
Size:

When it comes to solar inverters in Nigeria, there are many options to consider when purchasing one for your solar energy solution. In the most basic terms, a solar inverter converts the output of your solar panels installed on your roof into usable electricity for your home or business.

The primary function of the inverter is to convert the Direct Current (DC) provided by the solar panel into Alternating Current (AC) that can be used to power your home or office complex's appliances. Choosing the right product for a specific solar application is critical to your solution, and there are numerous factors to consider before choosing the right solar inverter for yourself or your client. There are various types of inverters, each with its own set of functions and properties. There is also the issue of determining the appropriate capacity of inverter to use in Nigeria.

LENTO are having vast experience of manufacturing and supplying of quality products in domestic as well as in international market. We are one of the biggest OEM manufacturers in India, having world class manufacturing setups and In-house R&D recognized by government of India, Which makes Lento one of the biggest manufacturer and exporter of Sine wave Inverters, UPS as well as Solar Photo Voltaic systems in India. Lento has also forwarded step towards designing and developing products based on solar end solar motor pump drive. The unit also has its own incorporated system to charge the battery bank through Entergy. Lento is all set to launch its brand-new ranges of solar energy based products such as solar charge controller, solar power conditioning unit, solar grid interactive acer Solar Power or Grid or DG Power. SHDU also regularly monitors the charging of battery bank parameters like load, battery voltage and solar power output. SHDU automatically discontinues itself from that solar or gird or DG set as soon as all batteries in bank are fully charged up to predetermined level. The system then restores itself to feeding the loads from the battery bank and charging from solar power.

Why buy Solar hybrid Inverters from us?

Q. What is hybrid solar inverter?

Q. Which kVA inverter is best for home?

Best Inverters for home in India in 2022

Q. How many kVA a house needs?

During normal energy use, the power supplied by your meter (9.2 kVA on average) should suffice. In theory, this allows you to simultaneously supply devices with a maximum power of 9.2 kW or 9200 watts.

Q. What is difference between solar inverter and hybrid inverter?

Q. Why do I need a hybrid inverter?

If you do want to go completely off the grid, a hybrid inverter can help, because they are designed to complete multiple tasks as a single device, including solar panel operation, battery storage, and drawing electricity from generators and other sources of power.

Q. Can I run hybrid inverter without battery?

Q. When should you use a hybrid inverter?