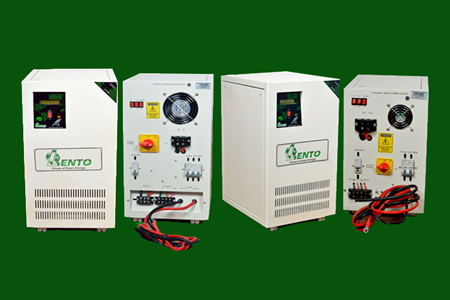 Best Off Grid Solar Inverters in India For billions of years, the sun has generated solar energy. The sun's beams (solar radiation) that reach the Earth are referred to as solar energy. This energy can be turned into heat or electricity. Solar energy is simply the capture, storage, and conversion of solar energy to electrical energy. Among the terms to be familiar with are: Photovoltaics Cells / PV Cells: A solar cell is a device that uses the photovoltaic effect to convert sunlight energy directly into solar electricity. Photovoltaics Module / PV Module: A photovoltaic module, often known as a PV module, is a bundled linked assembly of photovoltaic cells, also known as solar cells.
Size:

For billions of years, the sun has generated solar energy. The sun's beams (solar radiation) that reach the Earth are referred to as solar energy. This energy can be turned into heat or electricity. Solar energy is simply the capture, storage, and conversion of solar energy to electrical energy. Among the terms to be familiar with are:

Photovoltaics Cells / PV Cells: A solar cell is a device that uses the photovoltaic effect to convert sunlight energy directly into solar electricity.

How can we use Solar Energy?

All solar power systems operate on the same fundamental principles. Solar panels use the photovoltaic (PV) effect to convert solar energy or sunlight into direct current (DC) power. The DC electricity may either be stored in a battery or transformed into AC power by a solar converter, which can then be utilised to power household appliances. Excess solar energy can be delivered into the power grid for credits or stored in a number of different battery storage devices, depending on the kind of installation. A solar system can be 1 kWh, 2 kWh, 3kW, 5kW, 7.5 kW, or 10kW in size. On average, a house with monthly electricity consumption of 1000 kWh requires 26 – 30 solar panels (Each solar panel is 320 watt).

The three main types of solar systems are-

What is an on grid and off grid solar system?

On-grid and off-grid are the two most common types of solar systems. On-grid means that all the components of your system must be connected to the grid. Off-grid means that you have your own power generation system, but it may or may not be connected to the grid. Each has its benefits, but if you want to get into solar it's important that you understand what each system entails so that you can choose which one is right for your home or business.

On grid solar system- An on-grid or grid-tied solar system is one that operates in tandem with the power grid. This implies that any surplus or deficit in electricity may be supplied back into the grid via net metering. Many household users are choosing an On-grid solar system since they may receive credit for the extra power produced by their system and save money on their electricity bills. You will always have access to power, whether from the solar system or the grid. They are not powered by batteries.

Off grid solar system - Off-grid solar systems operate independently of the grid but include batteries that can store the solar power generated and supply electricity after the power goes off or during the night.

Here are a few fundamental things to consider when purchasing a solar inverter for your house or business:

An Auto sense intelligent control smart charger and electronic changeover, hence much better reliability. It conducts the quiet operation of AC motors as well as other inductive loads, unlike the noise that emanates from Modified Sine Wave Systems. It gives more accurate readings and reduced errors. Requires less energy consumption as compared to modified sine wave systems. Is able to run a wide range of appliances including computers/laptops, CFLS and other sensitive electronic devices. It also provides better voltage regulation and less fluctuation, hence a more stable power supply. It is environmentally friendly.

How much solar power do I need to go off the grid?

The average off-grid home usually requires about 7 Kw (or 7000 Watts) of power to rely entirely on its own energy production. Solar panels come in various forms, shapes and sizes.

Can I Run My Whole House on Solar Energy?

With a modern solar energy system, including power storage, you can definitely run a whole house completely on solar power. Today's high-efficiency solar panels and solar batteries make it cheaper than ever before to power an entire home exclusively using solar energy.

What is the best off grid solar inverter?

Which brand is best in solar inverter?

Lento focuses on harnessing power of R&D to develop innovative, future-proof products that are aligned with markets and requirements of end users.

Which is the best solar ups in India?

What is MPPT inverter?

MPPT is electronic DC converters that optimize the matching between solar arrays (PV panels) and batteries. In short, the mppt solar inverter converts the high voltage DC output of the solar panel into the low voltage required to charge the battery.

What are the advantages of using a grid-connected solar PV system?

The main advantage of a grid-connected PV system is its simplicity, relatively low operating and maintenance costs as well as reduced electricity bills. The disadvantage however is that a sufficient number of solar panels need to be installed to generate the required amount of excess power.

What is a solar house?

A solar house is a house equipped with glass areas and so planned as to utilize the sun's rays extensively in heating.

Which company is best for solar?

Lento India is the best for Solar.

What is the cost of the solar system for the House?

How do I choose a solar inverter?

As a general rule of thumb, the size of your inverter should be similar to the DC rating of your solar panel system; if you are installing a 6 kilowatt (kW) system, you can expect the proposed inverter to be around 6000 W, plus or minus a small percentage.

What voltage is best for off-grid?

Can I use solar without inverter?

No, the current solar panel is only effective at converting sunlight into electricity. A built-in inverter is needed to turn the direct current (DC) from solar panels into alternating current (AC) and supply power to the whole household.

Which is the No 1 solar company in India?

Number 1 in this List is Lento, a Leading Top 10 Solar Companies in India. As one of the Top and Best Solar Panel Manufacturer Company, Lento manufactures solar modules, solar cells, Solar Home Lighting System and other solar products.

What is future of solar industry in India?

Is solar farming profitable in India?

If the tariff recieved is Rs. 18 per kWh but the cost for the plant is only Rs. 8 crore then a 1 MW plant can make a profit of 1.6 crore per year, for 25 years! In rooftop solar there is an added uncertainity as there are few solar installations up so far on rooftops in India.

What is meant by Solar photovoltaic system?

What are solar appliances?

Solar appliances are a reliable solution for preserving energy and other sources on the planet as they are a never-ending source of energy. These appliances work on solar energy which harnesses the heat emitted by sun , which can be used anytime in the future in the form of solar thermal energy.

How do solar appliances work?

Solar power is harnessed using Solar Photovoltaic (PV) technology that converts sunlight (Solar radiation) into electricity by using semiconductors. When the sun hits the semiconductor within the PV cell, electrons are freed and bus bars collect the running electrons which results in electric current.